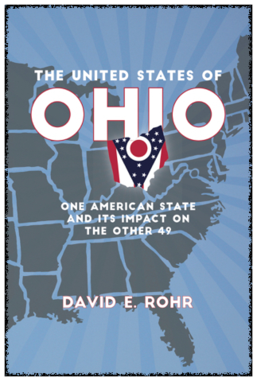 A Book By David E. Rohr

"I'm just a lucky slob from Ohio who happened to be in the right place at the right time."  - Clark Gable

Electoral significance has always distinguished the small-to-medium sized northern state sandwiched between Lake Erie and the Ohio River. Only twice since the beginning of the 20th century has Ohio failed to pick the candidate who ultimately won the presidential election. But presidential elections are only part of the Ohio story. That’s because the state has always been an innovator, an incubator and a bellwether for the American experience. In a unique look at Ohio, David Rohr chronicles key stories that come from the Buckeye State and the remarkable effect its development has had on the larger country.

​​ ONE AMERICAN STATE AND ITS IMPACT ON THE OTHER 49